University Project University of Applied Sciences Potsdam, Interaction Design​​​​​​​
Year 2018
Tasks My focus in this project was on the design of the app (f.e. the illustrations) and building the Prototype.
Team Elisa Bischoff, Linda Klotzbach, Caspar Kirsch
RESEARCH
Before we could start to develop our own concepts for an app, a common ideation phase was incorporated into the seminar in the class. It was important to exchange knowledge and observations in a large group and agree on a common goal for the app. We orientated ourselves in this section on the methods of "Sprint" by Jake Knapp. Since digital products are usually planned starting from the end, we first asked ourselves what we would like to achieve in two years with our app. After an anonymous exchange using Post-It notes and a subsequent vote in the big group, our 2-year goal was clear:
In 2 years, students should feel personally affected by climate change and have the desire and motivation to change something. They should no longer think to themselves, "That's none of my business!".
This goal was made visible to everyone to further brainstorming upon and recorded as a permanent reminder on a poster in our seminar room. It was supplemented in a second step by three aspects, so-called "sprint questions". These aspects seemed important to us and needed to be met in the pursuit of our 2-year goal.
In the wider discussion in the large group, we noted all emerging ideas, cues, observations, issues, and open questions on Post-Its. These notes followed the pattern of the "how-might-we-question" (HMW-question), a positive, concise phrase that always describes an "opportunity" rather than a "problem". These Post-Its also found their place, visible to all, on the seminar room wall. After another majority vote, the most important HMW-Questions were located on the user journey of the students to show us in which moment the students would use the app. 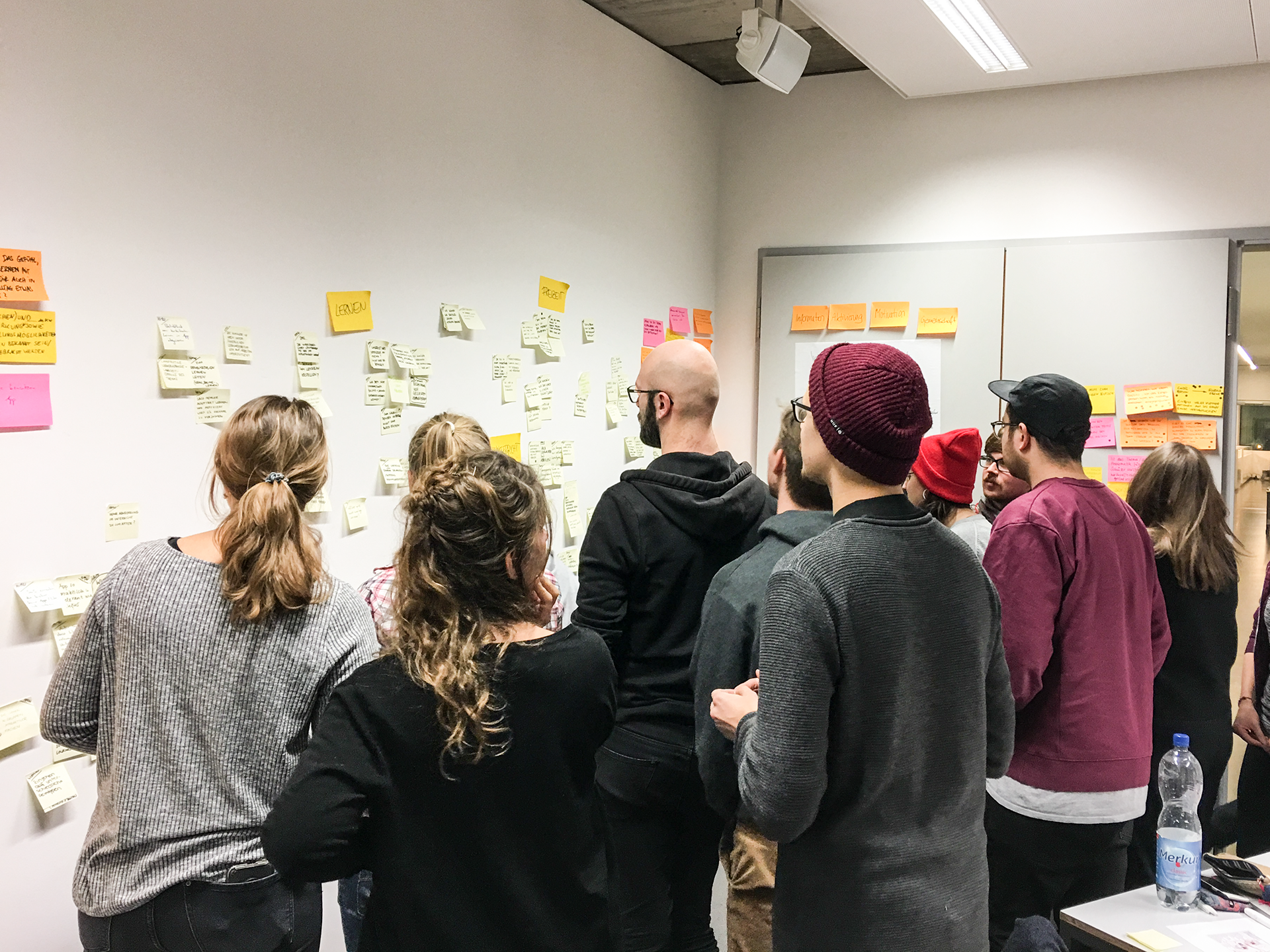 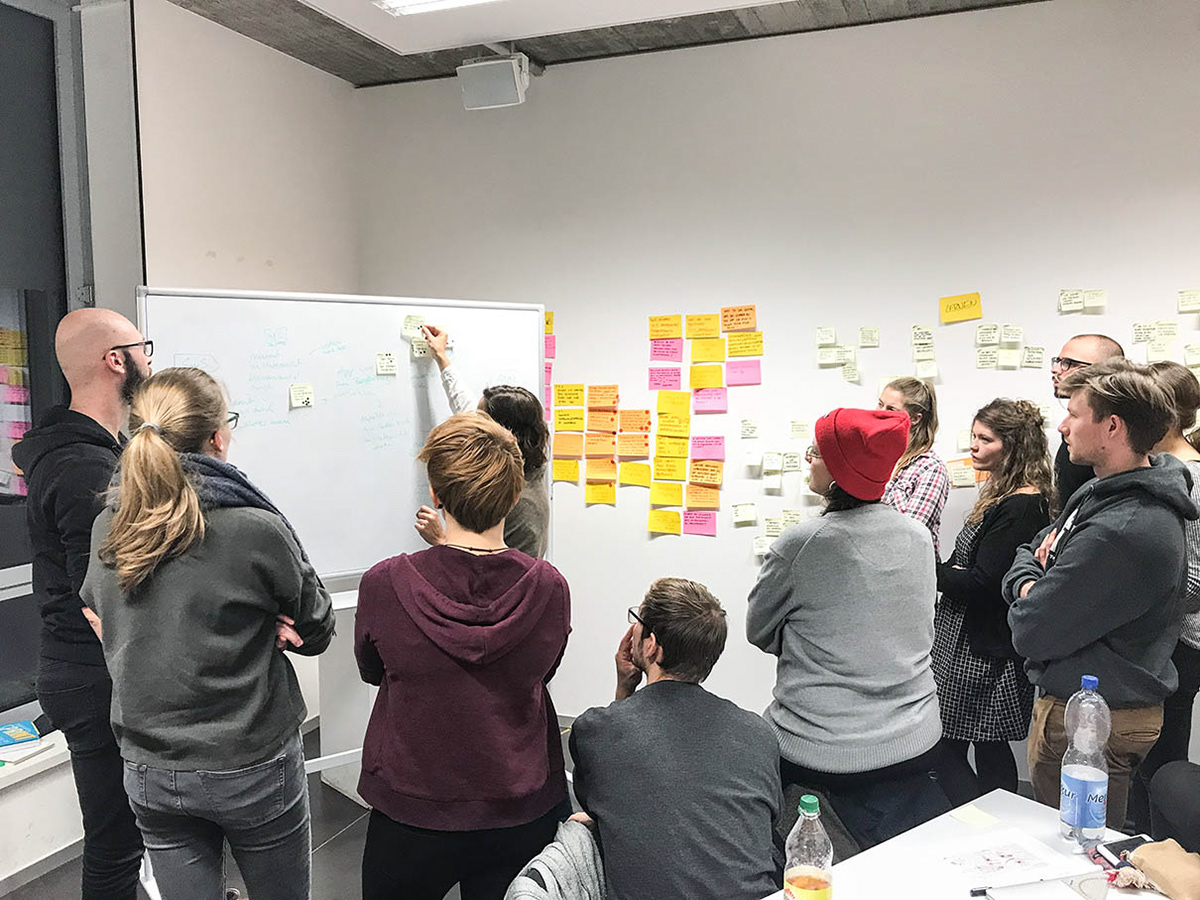 CLIMATE CHALLENGE PROCESS
In the second section, in contrast to the previous one, we clustered the original concepts according to similarities in topics and concepts. We formed groups around these concepts and were ready for the concrete concept development. First in analog sketches we tried to sketch a navigation system for the app and implement different topics and challenges. 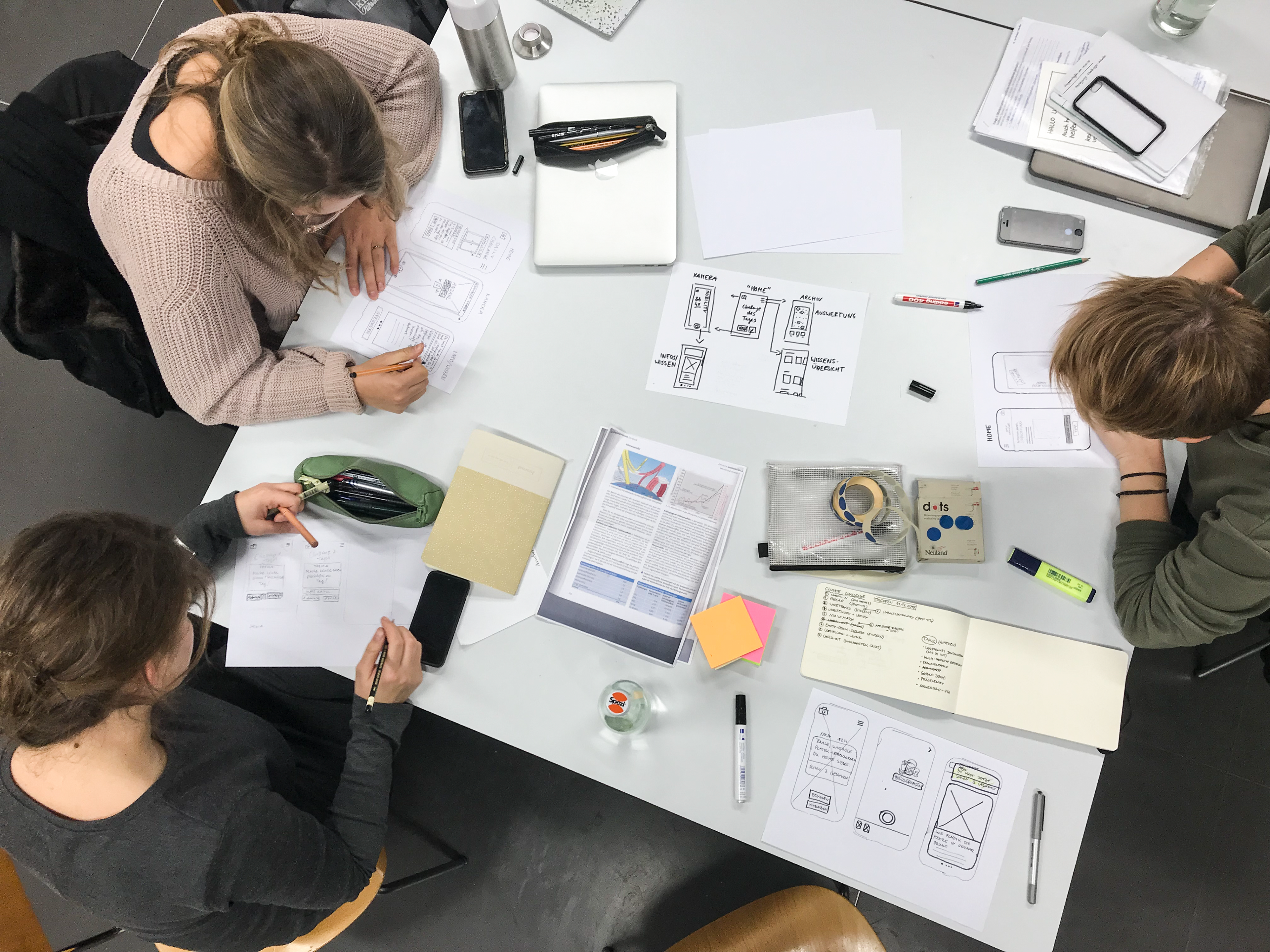 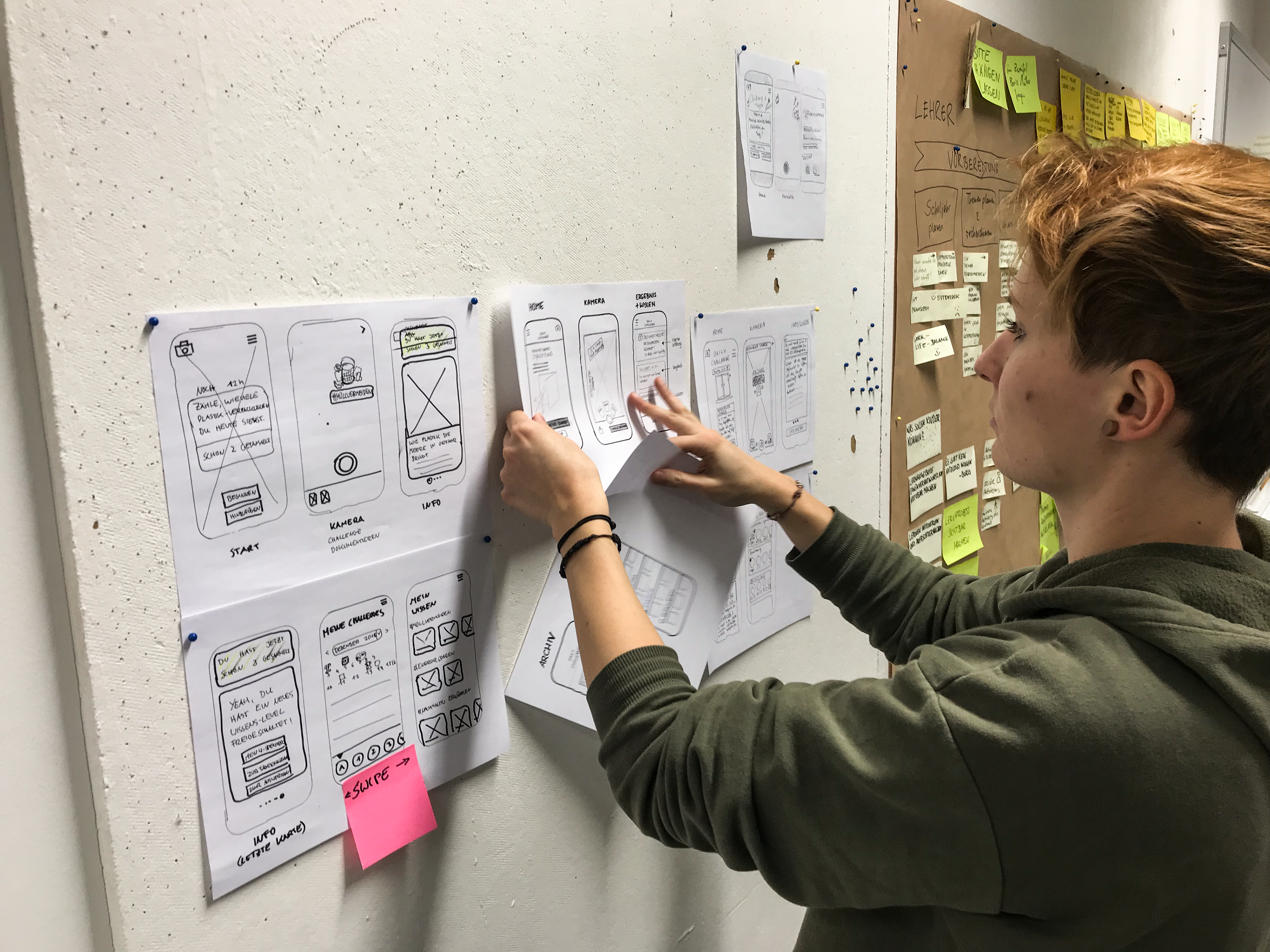 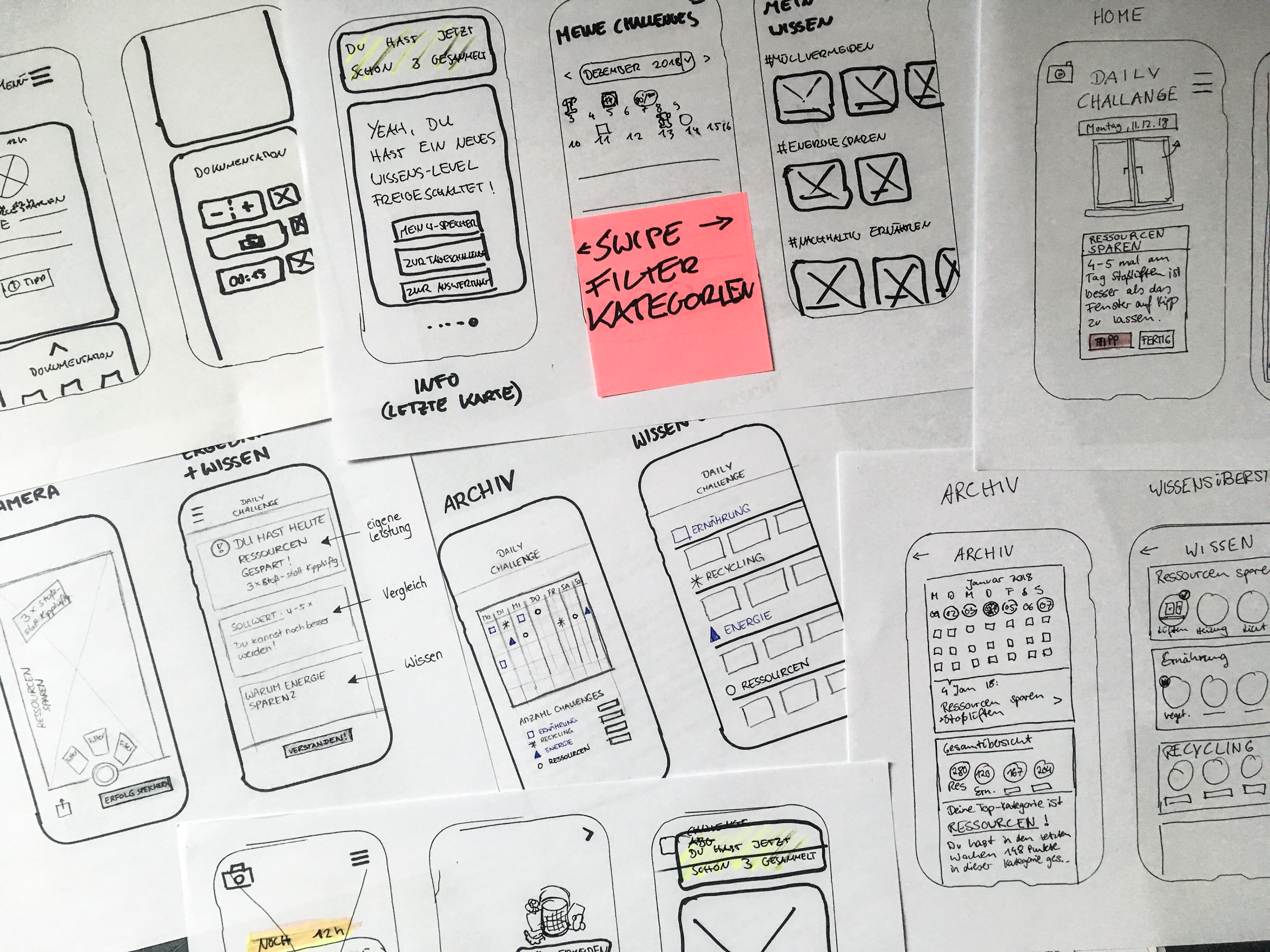 We started with drawing paper prototypes to bring together our initial ideas from the 3-screen concepts. Quickly developed for us from the three main components of our app "Climate Challenge":
- Main screen with the current challenge
- Archive in which all previous challenges are stored
- Knowledge archive that clearly displays the learned content
In order to make our app more attractive to students aged 15 and over, we focused on popular apps like Instagram and Snapchat. Playful features such as creating photo collages with stickers and texts were added to our app to increase the motivation for solving the climate challenges. So we started building a first prototype. For this we cooperated collaboratively in Figma. It was important that each of us could contribute to the design of the app. We quickly agreed on a very colorful and illustrative style that underlines the target group of the app.

With this first prototype of the app we went into the user test. The test with four different students confirmed that the creative function of the photo collage is both well-known and very well received. The subjects were convinced of the simple concept and could imagine the application in everyday life. However, we noticed through the user test that we have to work on the wording within the app and make related concretizations on the hierarchy between our three screens.

In the next step, we improved the features and the wording until the final presentation. Our focus was on the user flow and to make all actions in the app as clear and easy to understand for the students as possible.
OUTLOOK
In order to guarantee a longer use of the app, the next step would be to develop new challenges with associated content and information material. Especially when using the app in class, it should be ensured that all students have different challenges on the same day. Only then can an exchange arise and the curiosity to continue working with the app remains.
In addition, the integration of the app in the classroom and possibly in everyday homework would be useful and would have to be tested and evaluated with the teachers. With successful integration, the social aspect of the use would have to be further developed - the students should not only be able to share their own challenges, but also be able to directly see the challenges of the friends on a kind of pin board in order to increase motivation and a sense of community.
THE APP
As part of the “Climate Change” topic, teachers can recommend the “Climate Challenge” app as a supplement to class and as a learning aid for their students. Each day, the app introduces students to a new challenge, a challenge that they are faced with in everyday life. For example, they should remember to “blast-ventilate” in school instead of leaving the windows permanently tilted open.

When a new challenge is started, students are encouraged to document their experiences. These can be captured creatively in a collage. For the task of blast ventilation, tapping on an action item (the window) can record the execution of the action. In addition, extra elements can be added, such as stickers, your own pictures or text. If users are satisfied with their result, they can save the challenge.

Also at a later time on the same day, the processing of the Challenge can be continued. The remaining processing time will be displayed to the users. Once they have completed their task, they can finish the challenge. If the students do this, small knowledge portions will explain to them, why the small actions such as the blast-ventilation are so important in everyday life and what this has to do with climate change. They leaf through knowledge cards that have pictures, texts and videos ready for them. Afterwards, students have the opportunity to share their completed challenge with their friends.

If the students want to review their challenges or share them with others, they will find the content in the archive. Here they also have access to the knowledge they have learned so far and can review the content again.

What students experience when dealing with “Climate Challenge” follows a clear didactic concept: Activate → Inform → Evaluate and Document. Learning should be initiated and independently driven while the motivational control of learners should be addressed so that cognitive processes are initiated.
You will receive an invitation to action from “Climate Challenge”. These are deliberately low-threshold so one needs little prior knowledge to take part. The action in the real world is then reflected by a creative task and the documenting by creating a digital collage. This playful approach is known to the target audience through social media, such as Instagram Stories, and by utilizing previously gained app interface functionality knowledge. In addition, the app can also make the leap into the students’ free time.
The knowledge portions presented after a challenge are kept short and clearly structured. Since the students have already completed a practical task on the subject at this time, the information is linked to their interest. The information that is collected in the app is always accessible to them - the learning process is thus visible. The collages between students all look different in comparison, giving them an incentive to “show off” and compare their good deeds. Finally, cognitive knowledge is linked to a creative action, which makes it easier to remember.
↑Back to Top